The Russian Toy was developed in Russia from English-style Toy Terriers. It is a fairly close relative of the Manchester Terrier. 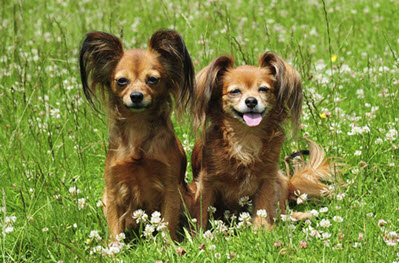 The Russian Toy comes in two varieties: smooth-coated and long-coated. When the long-coated was developed in the Soviet Union during the 1960s, it became known as the Moscow Toy Terrier. Later, both variants were placed in the same breed standard under the name Russian Toy.

If two smooth-coated dogs are mated with each other, most puppies will be smooth-coated, but long-coated offspring is still possible if the parents are carriers of the long hair gene.

We do not know of any instance where the mating of two long-coated Russian Toys have resulted in any smooth-coated puppies.

Short facts about the Russian Toy

A breed-standard Russian Toy is a very small dog, measuring 20-28 cm at the withers and weighing between 1 kg and 3 kg. The head is small, with big eyes and triangular ears. The tail is curved in the shape of a sickle. (In countries where docking is still legal, it is commonly docked.)

The coat can be long or short (smooth), and the commonly available colours are black & tan, brown & tan, blue & tan, and solid red of various shades. Some of the red Russian Toys are sables, which means that they are chiefly red but with black or brown hair tips.

A short-coated Russian Toy have a shiny and close-lying coat that resembles that of a Pražský Krysařík.

A long-coated Russian Toy doesn’t jut have a long coat; it is also adorned with extensive feathering (“fringe”) of the ears, legs and tail. This fringe is typically 3-5 cm long and can be straight or slightly wavy. The fringe isn’t there in the puppy, but should be fully grown out by the time the dog turns 3 years old. 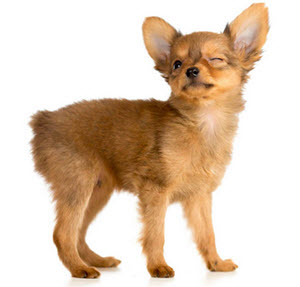 Exactly when English-style terriers first arrived to Russia remains unknown, but such dogs can be seen in 18th century Russian paintings. Also, an English-style terrier is on display in the Museum of Zoology in Saint Petersburg, with a sign telling us that this is a short hair terrier named Lizetta who personally belonged to the Russian Emperor Peter the Great. The dog is dated 1716-1726.

In the Soviet Union

The Russian Toy was strongly associated with Russian royalty and nobility, but the breed survived the revolution and records show that two Russian Toys participate in a dog show in Moscow in 1923, just a few years after the revolution. In 1924, three Russian Toys were awarded with medals at a show in Odessa, Ukraine.

Still, the turbulent 1930s and 1940s proved difficult for many Russian dog breeds, and by the end of World War II few pure bred Russian Toys remained. A breeding program was eventually launched to revitalize the breed, but finding suitable parents and ensure reasonable genetic diversity was difficult since few Russian Toys remained within the Soviet Union, and isolationist policies made it difficult to procure toy terriers from Western Europe to inject new blood into the breed.

By 1960, no less than 76 Russian Toys were entered into an exhibition in the Soviet Union, but it would take until 1966 before the first breed standard for both the short-coated and the long-coated variety was established and authorized by the Ministry of Agriculture.

An important sire in the history of the long-coated variety is Chikki, born in the Soviet Union on 12 October 1958 to two parents who although smooth-coated had slightly longer hair than what was normal for the breed. Initially, Chikki wasn’t registered since his coat was considered too long. Up until then, puppies born with this type of coat had been kept away from the breeding programs or even euthanized. Eventually, Chikki was registered and purchased by Evgeniya Fominichna Zharova who wanted to use him for the creation of a long-coated variety. She mated Chikki with Irma, who also had a slightly longer coat than what was considered normal. Together, Chikki and Irma produced a litter consisting of three long-coated puppies.

After the Soviet Union

After the collapse of the Soviet Union it became much easier than before to import foreign dog breeds to the former member states, including Russia, and the native Russian Toy lost its popularity. Once again, the breed nearly died out, but was saved by dedicated breeders.

The rest of the world

During the 1990s, dog enthusiasts outside the former Soviet Union began to notice the charming little terrier and kennels sprung up here and there. Russia’s neighbour Finland had a head start here, because a long-coated male long-haired Russian Toy had been imported to Finland back in 1988 – before the end of the USSR. This male, named Champion-Bonaparte, was registered in Finland by Sirpa Lehtinen of the Kennel Jojamint. Later that same year Kennel Jojamint imported a female Russian Toy named Ste-Shihu from Estonia. Together, these two dogs produced Finland’s first Russian Toy litter, when Jojamint’s Agostini and Jojamint’s Alboreto were born in late 1988.

Today, the interest in Russian Toys outside Russia is especially high in former Soviet states such as Ukraine, Belarus and Estonia, as well as eastern European countries such as Poland and the Czech Republic. The breed has also remained fairly popular in Finland, and is on the rise in Japan.