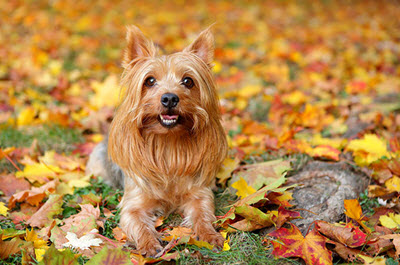 True to its terrier origins, the AST is fond of hunting and killing rodent vermin, such as mice. Some also hunt and kill snakes. The UK breed standard stipulates that the dog must look as if has the ability to hunt and kill domestic rodents, but no proof of actual ability is required. (It has been placed in the toy group and not in any of the working dog groups.)

The long and silky hair is a distinguishing feature of this dog, and various aspects of the coat is extensively described in the breed standard – including desirable shades and exact placement of markings.

Traditionally, the tail of the Australian Silky Terrier has been docked. Today, this practise is illegal in many countries.

The intentional breeding of silky-haired terriers in Australia started towards the late 1800s, when rough coated terriers were crossed with Yorkshire Terriers. 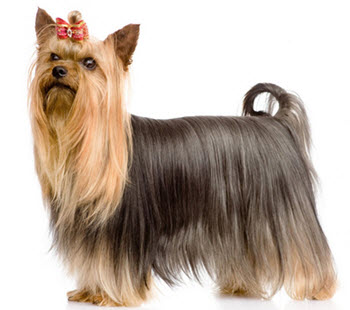 As mentioned above, McArthur Little in Sydney was a very important breeder in the history of the Australian Silky Terriers. His dogs were known as Sydney Silky Terriers and kept chiefly by households in the city of Sydney. This was during an era were most dogs in Australia were still working dogs, e.g. sheep dogs and guard dogs, and the Sydney Silky was unusual in that it was bred chiefly as a companion dog and a dog suitable for a leisurely city life.

The Australian Silky Terrier spread to the USA with servicemen who brought them back with them after being stationed in Australia during or after World War II.

In 1954, newspaper photographs of AST dogs published in the U.S. stirred up an increased interest in the breed among U.S. households, and five years later the breed was recognized by The American Kennel Club under the name Silky Terrier.

The Silky Terrier is only suitable for people who are willing and able to devote a lot of time to care for its coat. Without daily brushing and combing, the coat will become tangled and matted.

It is also important to chose a suitable shampoo; one that can keep the coat clean without causing dryness and skin irritation.

Professional grooming is recommended at least once a month.

The Silky Terrier is prone to teeth and gum problems, and should have its teeth brushed weekly with a toothpaste suitable for dogs.

To reduce the risk of tracheal collapse, many Silky Terrier owners opt for a harness instead of a collar.