The Havanese is a Bichon-type breed developed on Cuba. It is a small but sturdy dog with a silky textured coat. The Havanese is playful and curious, with a springy gait and youthful temperament. 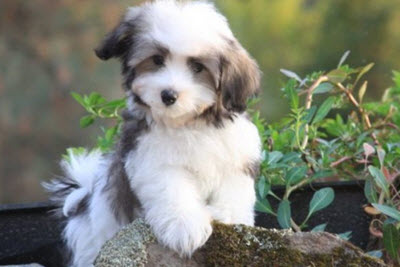 The Havanese hails from the Blanquito de la Habana (little whitey of Havana), which in turns hails from the Bichon Tenerife, a Bichon-type dog associated with the island of Tenerife, where sailors from Europe would stop for supplies before embarking on the long journey over the Atlantic to Cuba and other parts of the Americas. Today, both the Blanquito de la Habana and the Bichon Tenerife are extinct breeds.

Exactly how the Havanese was developed remains unknown, but the Blanquito de la Habana was probably cross-bred with other Bichon-type dogs on Cuba. Today, the Havanese is recognized as the national dog of Cuba.

During and after the Cuban revolution, many prominent Cuban families fled from the island, and some of them managed to bring their Havanese dogs with them. This helped establish the breed in other countries, especially the United States, although the Havanese wasn’t recognized by The American Kennel Club until 1996.

Short facts about the Havanese 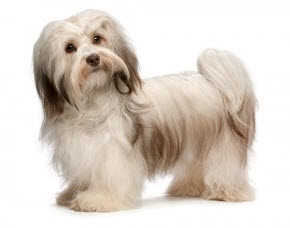 According to the UK Kennel Club’s breed standard, the ideal Havanese is small and sturdy, with a body length that slightly exceeds the dog’s height at the withers. The tail should be set high and carried in a plume over the dog’s back.

The ideal height is 23-28 cm (9-11 inches), and the body should be equal in height from withers to elbow as from elbow to ground. The front legs should be straight, while the ideal hindquarters display moderate angulation. All four feet should be small and tight (so called “hare feet”).

When the dog walks or runs, it should be with a springy step and the legs should move parallel along the line of travel.

The Havanese is characterised by soft and silky hair that is wavy or slightly curled, and the tail is profusely feathered with long and silky hair. The dog should be full coated, with an undercoat.

Any colour or colour combination is permissible except merle.

The UK Kennel Club’s breed standard for Havanese calls for a dog that is intelligent, lively, outgoing, friendly and affectionate.

Havanese dogs are known for becoming especially attached to one member of the household and follow this person around, staying very close to him or her.

The Havanese is not a yappy dog and will usually not bark at strangers. If it does alert you to the presence of a stranger, simply letting the dog know that you have noticed the stranger will normally be sufficient to put the dog at ease.

Housebreaking a Havanese is usually easier if you train it not just to go outside but also to use a litter box indoors. With access to a litter box indoors, the Havanese can usually be housebroken earlier than the average toy breed. Since this dog is so small, a standard litter box for cat’s will work well.

The coat needs to be combed at least twice a week, and even more frequently than this if it is dense or curly rather than just slightly wavy.

Owners who don’t display their Havanese dogs at dog shows often have the coat trimmed shorter to reduce the need to comb it. The so called “puppy cut” is popular, where the hair isn’t allowed to grow longer than 2 inches before being cut back to 1 inch length again.

After a bath or shower, the Havanese needs help to dry quick enough, e.g. by towelling or blow-drying the dog. (The puppy cut will reduce or eliminate the need for this.)

Long hair should be combed out after getting wet, otherwise it may dry in mats.

Hair growing between the paw pads can make it difficult for the dog to gain traction on smooth surfaces. Regular trimming is advisable.

If the dog goes for a walk in the snow, ice clumps can easily form between the paw pads. Clumps can be removed quickly by soaking or rinsing them with tepid or medium warm water. Some owners in cold climates buy booties for their Havanese dogs.

Tear-staining is fairly common in this breeds.

In some cases, frequent cleaning around the eyes will be enough to handle the problem. In other cases, you might have to:

In all dogs, dropped ears increase the risk of ear fungal infections, bacterial infections, etc. Regularly inspect the ears of your Havanese to detect early warning signs. Don’t just look into the ears – sniff as well, since a bad odour is a red flag. Keep the ears clean, but don’t overdo it since overly meticulous cleaning can cause irritation.

In some individuals, some of the hair growing inside the ears need to be plucked to allow for better air circulation. 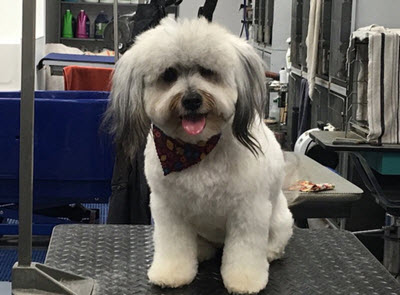 These seven tests are recommended by the Havanese Club of America:

The Havana Silk Dog is derived solely from the Havanese, without any genetic input from other breeds. It was developed in Cuba by Havanese breeders wishing to re-create a dog that would look more like early depictions of the Havanese; i.e. paintings, sculptures and written descriptions of Havanese dogs featuring a flatter and more silky coat, a longer muzzle, smaller ears and straighter forelegs. The idea was to create a dog that more accurately resembled the original Havanese dogs and by doing this also move away from certain health problems that had become prevalent in the modern Havanese.

At the time of writing, the Havanese Silk Dog has not been recognized as a separate breed by the UK Kennel Club.