The Maltese is a toy breed hailing from the Central Mediterranean Area, possibly from the island of Malta from which this dog derives its English name.

Short facts about the Maltese 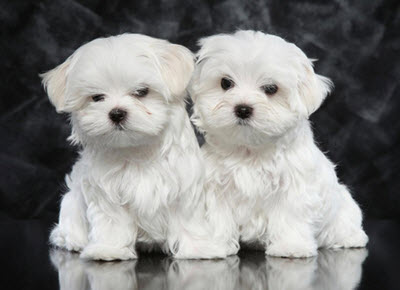 The oldest known record of a Maltese-like dog is found on a Greek amphora dated by archeologists to the decades around 500 BC. Not only does the dog look similar to a Maltese – the amphora is also adorned with the word Μελιταιε (Melitaie), and old name for the island of Malta. The amphora, which is Athenian, was found in the Etruscan town of Vulci.

References to the Maltese dog is also found in Ancient Green and Roman texts, and Aristotle calls the dog Melitaei Catelli in a text from 370 BC where he compares it to a mustelid. In Latin, the Maltese was know Canis Melitaeus.

The Greek writer Callimachus wrote about this breed around 350 BC, and the famous Pliny also mentions this dog, and suggests that it has been named after the Adriatic island Méleda.

In the early first century AD, Strabo reports that the Maltese comes from the Mediterranean island of Malta and is a dog favored by noble women. The first century AD is also when the Roman poet Martial writes descriptive verses to Issa, a small white dog – possibly a Maltese – owned by his friend Publius. This friend, identified only as Publius by Martial, might have been was the Roman Governor Publius of Malta, but this has not been proven.

This dog’s link to Malta is mentioned in the work Insulae Melitae Descriptio by Abbé Jean Quintin d’ Autun. He was Secretary to Fra’ Philippe de Villiers de L’Isle-Adam (1464–1534), who in turn was a prominent member of the Knights Hospitaller at Rhodes and later Malta, and their Grand Master from 1521.

In the 1600s and 1700s, several dog breeders worked to make the Maltese even small than before, and by 1792 Linneaus describes it as being about the size of a squirrel.

Through extensive cross-breeding with other small companion dogs, including very small versions of Poodle and Spaniel, the Maltese almost vanished as a distinct breed and by the early 1800s at least nine different breeds/lines were called Maltese.

In England, both solid colour and parti-coloured Maltese dogs were accepted at dog shows between 1902 and 1913.

The Maltese was recognized as a FCI breed under the patronage of Italy in 1954. The decision was made at the annual Fédération Cynologique Internationale meeting in Interlaken, Switzerland.

The current FCI standard is from November 27, 1989. The latest official translation of it from Italian to English was made in 1998.

The Maltese have a very long history of being a companion dog and has been selectively bred for traits such as playfulness and liveliness. Even as this dog ages, it tends to retain its puppy-like exuberance and wish to stay close to humans as much as possible.

The clumsy movements of young children can be scary for the small and delicate Maltese, and unsupervised interaction is not recommended. 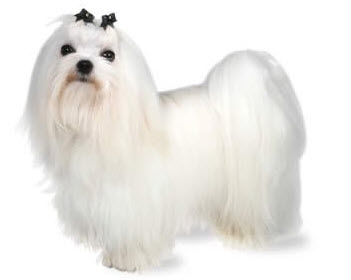 The Maltese doesn’t need much daily exercise, but that doesn’t mean that it will do well with no daily exercise. Still, due to its small size, it can get quite a lot of its activity requirement filled in a fairly small space, such as an enclosed rowhouse garden where it is given opportunity to not just be physically active but also play, investigate and exercise its mind.

The Maltese can be a very barky dog. It (rightfully) lacks faith in its own ability to protect itself and its home alone, so it will try to get the attention of fellow dogs and humans in the household instead as soon as it notices something that it deems suspicious. It can be turned into a very good watch dog (not guard dog or protection dog) if properly trained and socialized to distinguish friend from foe and everyday noises from anomalies.

The barkiness of the Maltese is a common reason for it being abandoned, especially since many people who buy a Maltese live in apartments where the barking can become a nuisance for nearby neighbours. A research project in Australia showed the Maltese to be the most frequently abandoned dog in the country, and similar figures have been reported from South Korea.

Maltese dogs are susceptible to so called “reverse sneezing”. It sounds like a snorting, gagging or honking sound. It is not dangerous and will go away after about a minute without any special treatment.

Examples of situations where the Maltese is extra likely to experience reverse sneezing:

If the incidence of reverse sneezing in your Maltese increases noticeably, contact a veterinarian to rule out health problems such as allergies.

The Maltese has no undercoat and can appreciate a sweater when the weather is chilly.

Bathing your Maltese once a month or less is recommended, since frequent baths can make the skin dry. For most Maltese dogs, bathing the dog only when it has become dirty will be sufficient. If the dog gets dirty a lot, experiment to see if it is possible to get it clean without using shampoo or soap, since such products can exacerbate problems with dryness by removing naturally occurring oils from the dogs fur and skin. A dog that is dirty from playing outdoors in the mud can often been cleaned using water only, since mud comes off easily when wet.

After getting wet, a Maltese dog with long fur can require blow-drying to prevent matting and unpleasant smells.

Regular grooming is required to prevent the coat from matting.

Many owners keep their Maltese clipped in a so called “puppy cut” all over, where the fur is allowed to grow no longer than 2 inches (5 cm) before being trimmed down to 1 inch (2.5 cm) again.

Owners of show dogs are more likely to keep the fur long and wrap it to keep it from matting and breaking off. The fur is then unwrapped and combed out to its full length before shows.

Tear-staining, dark staining that appears in the coat around the eyes, can be a problem in this breed. The amount of tear-staining is linked to how much the eyes water and how large the tear ducts are. Daily cleaning around the eyes can be required to continuously get rid of the stains.

Pet shops and veterinarians sell powders and solutions that can be utilized to combat tear-stains.

In some dogs, the antibiotic Cephalexin will reduce excessive tear-staining.

Compared to many other toy breeds, Maltese dogs are especially prone to cavities. To decrease the risk of teeth problems, keep your dog on a proper diet, don’t allow it to snack between meals, and make sure it has suitable items to gnaw on to clean its teeth and gums. Your veterinarian can advice farther. Some Maltese need to have their teeth brushed regularly with special tooth paste for dogs.

Untreated cavities and gum problems can lead to infections that make the teeth fall out. This is especially common in older Maltese dogs.

Is the Maltese a hypo-allergenic breed?

If you are allergic to dogs and thinking about getting a Maltese, make sure to spend a lot of time with a Maltese dog before you commit to owning one. It is absolutely heartbreaking to get a Maltese and then eventually realize that you are developing allergic symptoms that weren’t noticeable when your exposure to these dogs were just brief and not very intense.