The Japanese Chin is a small dog strongly associated with Japanese nobility.

In Japan, it is known simply as Chin which means catlike. This might be a reference to how the Chin loves to be high up and on top of things; this dog is much more likely to perch itself on the window sill than take a nap under your bed. The Chin is also similar to a cat when it comes to cleanliness, and it will cleans its own face by wiping it with its paws and front legs just like a cat would. When two or more Chins are kept together, they will clean each others faces.

The Japanese Chin has large, bulging eyes and strabismus is common. Since a certain amount of white is constantly showing, the dog can look as if it is permanently astonished by its surroundings.

Short facts about the Japanese Chin

The breed is believed to have originated in China and eventually entered Japan as gifts to the Japanese royal household – either directly from the Chinese Empress or from the rulers of Korea, or maybe a combination of both. In Japan, the route by which the Chin arrived is a widely debated topic, and so is the date of its introduction.

According to one story, the Empress of Japan received Chins as gifts as early as the middle of the sixth century AD. Other sources pinpoints the exact year of introduction to 732 AD, stating that this was they year when Chins were first given to Japanese royalty from the rulers of Korea.

For a long time, only royals and nobles were allowed to own Chins in Japan. Unlike most other dog breeds, Chins were (and still are) kept solely as companion dogs and not used for hunting, herding, guarding or similar. Each noble house bred Chins according to their own preferences and many different Chin variants emerged, e.g. when it came to size, body type, eye set and coat density.

Portuguese seafarers brought East Asian dogs back to Europe as early as the 1600s and some documentation indicate that they might have brought Chins to Catarina de Bragança (1638-1705). Bragança’s father was King John IV of Portugal, and Catarina eventually became Queen of England, Scotland and Ireland by marriage to King Charles II.

Japan had embarked in an isolationist policy in 1636, but small Dutch trading posts remained and Japan also kept limited contact with China and Korea. After more than 200 years, the policy was changed which made exporting Chins easier.

In the 1860s, Queen Alexandra helped popularize the Japanese Chin among the royals of Northern Europe. Alexandra was a Danish princess who married the future King Edward VII of Great Britain in 1863 and received her first Japanese Chin shortly afterwards. Alexandra took a liking to the Chin and soon became the owner of several more, imported from both Japan, China and continental Europe.

In his book Edward & Alexandra: Their Private and Public Lives (published in 1992), the biographer Richard Hough describes how Alexandra always had her Chins around her.

“She never entered a room or sat down without dogs around her, and often on her lap. When she played the piano, they would be at her feet; and there would often be one lying across her, too. There might be half a dozen of them beside her at a time, and all though they looked so similar, she never got their name wrong.”

When the U.S. naval officer Matthew Calbraith Perry visited East Asia in 1853 in an effort to facilitate trading, he was given three male and three female Chins from the Japanese Emperor. One pair was intended for the British queen, one for the president of the United States, and one for Perry himself.

Of these six dogs, only two survived the trip back to the United States. What happened to these two dogs is debated; some sources state that both of them were given to U.S. president Franklin Pierce, while other sources claim that they were handed to James Stirling, Rear admiral or the Royal Navy, with instructions to bring them to the UK and deliver them to Queen Victoria. The most widely accepted account is the one where Perry gave the two surviving dogs to his daughter, Caroline Perry Belmont. (Trivia: Caroline’s son August Belmont Jr, was president of The American Kennel Club from 1888 to 1915.)

In the United States, breed became known as Japanese Spaniel and it was one of the first breeds to be accepted into the registry of the newly formed American Kennel Club (AKC), who registered their first Japanese Spaniel (a dog called Jap) in 1888. The name Japanese Spaniel was exchanged for Japanese Chin in 1977.

The journey from East Asia to North America was difficult for these delicate dogs and many of them perished before reaching land again. There are accounts of dead Chins being carefully wrapped in silk before receiving their burial at sea. 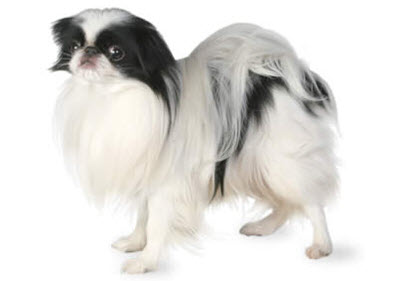 Size in the West

As mentioned above, many different types of Chins existed in Japan, according to the preferences of each noble family. When the Chin was introduced to the West, a small variant weighing a maximum of 10 lbs was the one that became popular, and this is why so many Kennel Club breed standards stipulate such as low weight for Japanese Chins.

The Japanese Chin is alert, intelligent, friendly and independent. It has been selectively bred to be an entertaining companion, and can for instance decide to break out in a little dance on its hind legs or do the “chin spin” where the dog turns around in rapid circles. Some Chins even make a noise that resembles singing.

The Japanese Chin is not an excessive barker, but will bark to alert its humans about suspicious activity, e.g. a stranger approaching.

Brushing and combing is required more than once a week, especially the skirt and the area under the dog’s ears and legs.

Frequent baths or showers are not recommended since it can dry out the skin and coat.

The skin folds in and around the nose and face can become infested with fungi or other pathogens, since these folds can trap moist. Make a habit out of regularly cleaning out the folds with a cotton swab, especially if the dog’s face often gets wet or the dog lives in a humid environment.

The oversized eyes should be inspected regularly by the owner to detect early signs of irritation.

The Japanese Chins is especially prone to:

Brachycephaly is Greek for “short head”. Just like many other dog breeds, the Japanese Chin is

brachycephalic which means it has a very short face / muzzle. This can lead to breathing problems and eye problems.