The brave, inquisitive and sturdy Affenpinscher was developed in Germany to kill rats and other vermin in stables, granaries, kitchens and similar. It’s exact origin remains unknown, but the German Pinscher contributed with genetic material to the Affenpinscher, most likely together with smaller dogs and dogs with flatter faces. 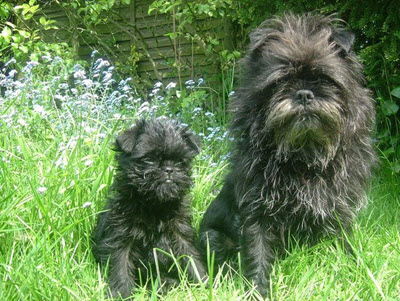 Dogs similar to the Affenpinscher have been knowns since at least the early 17th century, but were a bit larger than today’s breed, standing up to13 inches at the withers, while the modern Affenpinscher is no taller than 11 inches (UK Kennel Club breed standard). These old-type dogs also came in a wide range of colors – inlcuding black, tan, red, fawn and grey – and often had white feet and chests. Nowadays, the UK Kennel Club only accepts uniformly black Affenpinschers or black dogs with grey shading.

Today, Affenpinschers are chiefly kept as companion dogs, but they have largely retained their affinity for hunting vermin and can pose a threat to family pets such as hamsters and guinea pigs.

Affenpinschers are commonly described as brave, curious and mischievous. The face – with its abundance of loose shaggy hair that stands away from the skull and frames the eyes, nose and chin – is said to resemble that of a mischievous little monkey, and Affen is the German word for monkey and ape.

Short facts about the Affenpinscher

The UK Kennel Club’s breed standard doesn’t specify any ideal weight for Affenpinschers. Depending on height, most Affenpinschers are within the 3 kg – 6 kg range.

The UK Kennel Club’s breed standard for Affenpinscher stipulates a rough coat with a harsh texture. The coat must be short and dense on some parts of the body and shaggy on others. The coat should be longer on the shoulders, the neck and the head of the dog, with loose shaggy hair standing out and hair framing the eyes, nose and chin. If the coat is correct, no trimming will be necessary. The breed standard’s coat color is black, with grey shading being permissible. (In this regard, the UK Kennel Club is more strict than the American Kennel Club, since the AKC permits a wide range of colors, including red, beige, tan and silver.)

Even though the breed standard doesn’t call for coat trimming, some owners elect to have their Affenpinschers trimmed, either for practical reasons or to make the “mane” more noticeable by shortening the coat on the rest of the body.

The Affenpinscher is often recommended to people looking for a dog that doesn’t moult, but this dog is by no means a non-shedding breed. Frequent grooming can reduce the amount of fur released in the home. 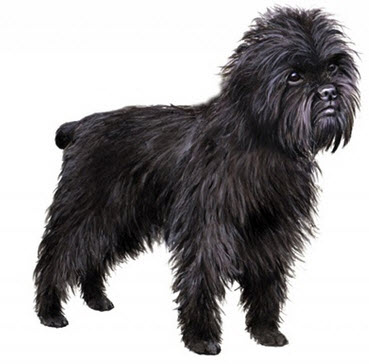 To adhere to the UK Kennel Club’s breed standard, the Affenpinscher must be small but not delicate in any way. It should be sturdy in build, with a mischievous expression and a lively, strutting gait. When in motion, the dog should lift its feet high, with no hint of hackneye action or plaiting.

The breed standard calls for a short and straight back, well sprung ribs (but chest not too deep) and just a slight tuck-up at loin. The overall appearance should be sturdy, with straigh front legs carried close to the sides, and elbows that are neither in nor out. The hindlegs must be well set under the body without excessive angulation. The ideal feet are small, round and compact with dark pads and nails. Just like the elbows, the feet shouldn’t be turning in or out.

When it comes to the tail, the breed standard requires a tail that isn’t just set high but also carried high. The tail should be left at a natural length and curve gently over the dog’s back when moving.

To adhere to the breed standard, the Affenpinscher must have a short and straight neck, with tight and unwrinkled throat skin. The head should be fairly small in proportion to the body, with a domed forehead, a broad brow, a marked stop (on indented), a blunt muzzle, a short snout (but without skin wrinkling) and a slightly undershot mouth. The muzzle should not be so short and flat that it makes it difficult for the dog to breath. When the mouth is closed, neither teeth nor tongue should be visible.

In addition to this, the breed standard calls for a prominent chin with good turn up, and a broad lower jaw with incisors in a straight line. The nose must be black with wide open nostrils.

The eyes should be round, sparkling, medium in size and not protruding. The area between the eyes and the nose should form an equal sided traingle.

The ears should be small and set high, and can be either dropped or erect.

To comply with the UK Kennel Club’s breed standard, an Affenpinscher should be lively and self-confident, and carry itself with a comic seriousness. It should also be a loyal and loving companion, watchful of strangers, and fearless toward aggressors.

Affenpinschers are often mistaken for terriers, since they share a lot of caracteristics with the dogs in the terrier group.

Affenpinschers tend to get along well with other pets, but their eagerness to hunt vermin can make them dangerous to hamsters, guinea pigs, pet rats, and similar. Affenpinschers can also be quite territorial around food and beloved toys.

An Affenpinscher is a good choice if you want a dog that is investigative, playful and brave, provided that you are also ready to deal with its stubborness. It is not the easiest breed to housebreak.

The Affenpinscher is very loving toward family members and also very protective, especially considering its size. It needs to be properly socialized from a young age to prevent it from becoming overly protective and react aggressively toward all non-family members that approach the family. When the Affenpinscher percieves a treath, it is remarkably fearless and can become very excited.

When it comes to excersise, varied training is more important for the Affenpinscher than being allowed to run for miles every day. This dog gets bored fairly easily.

The expected lifespan for an Affenpinscher in the UK is around 12 years. This is a bit lower than for the average toy breed.