Coton de Tuléar is a small dog with a distinctive cotton-like coat. The breed’s name is derived from the texture of the coat and from the city of Tuléar in Madagascar. 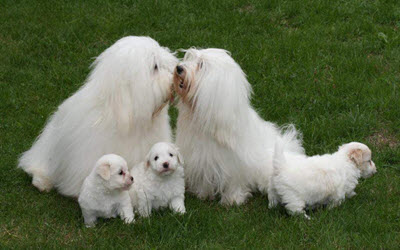 The Coton de Tuléar was bred to be a companion dog and it loves meeting people – including strangers. It will often try to curry attention by walking on its hind legs or carrying out other little tricks. It is easy to train and loves to learn as long as it is rewarded with attention. Many Coton de Tuléars relax during the day and come alive in the evening, probably an adaptation to this breed’s role as an entertaining companion dog.

Coton de Tuléar is the national dog of Madagascar and a stamp featuring the image of a Coton was released by Madagascar in 1974.

The Coton de Tuléar was developed on the island of Madagascar and is today recognized as the country’s national dog.

The origin of the breed was probably Bichon Tenerife and Tenerife Terriers who mated with local dogs on Madagascar. Exactly when this occurred remains unknown, but it is likely that seafarers, including pirates, first brought Bichon Tenerife and Tenerife Terriers (both native to the Mediterranean region) to Madagascar as early as the 1500s and then continued to do so in the following century.

For a long time, Madagascar was a pirate haven, including the famous pirate based on St. Mary’s Island. Exactly why pirates brought Tenerife dogs to Madagascar is a bit of a mystery – maybe they simply liked them as companion dogs, maybe these small dogs were good rat catchers onboard (especially the terriers), or maybe the dogs were among the booty stolen from ships and ports attacked by the pirates.

Despite popular claims, there are no evidence of feral packs of Coton de Tuléar ever hunting wild boar and alligators on Madagascar. 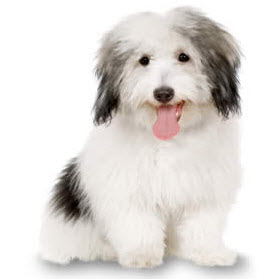 Coton de Tuléars were occasionally brought back to Europe by pirates and other seafarers, and eventually also by returning French colonists. The breed remained fairly obscure in Europe until the 1970s and Coton de Tuléars still not considered a household name.

Societe Central Canine (the national Kennel Club in France) recognized the breed in 1970, and acceptance by the Fédération Cynologique Internationale followed in 1972.

The breed is recognized by the UK Kennel Club, which has placed the breed in their toy group.

In the 1970s, the biologist Dr. Robert Jay Russell visited Madagascar, got to know the breed and imported Coton de Tuléars to the United States. It was Dr. Russell that coined the name Royal Dog of Madagascar, and he also developed his own breed standard for the dog. He established the Coton de Tuléar Club of America in 1976 and opposed American Kennel Club recognition. It wasn’t until 2014 that the breed was fully recognized by the American Kennel Club.

When the coat is worn in its natural state, it requires daily brushing and combing.

This is not a heavily shedding dog, but it will drop old hairs. These hairs tend to get stuck in the coat rather than end up on furniture etc, which have given rise to the idea that the Coton de Tuléar is a “non-shedding dog”. If the dropped hairs aren’t brushed away daily, they will form mats and tangles.

In addition to walking, running and playing, Coton de Tuléars love to swim.

Coton de Tuléars can become very vocal when having fun. They don’t just bark; they also emit other sounds, such as grunting.