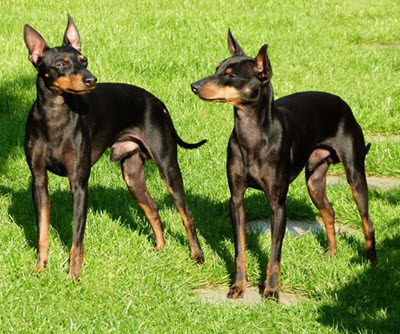 When the first all-breeds dog show took place in the United Kingdom, a lot of Black and Tan Terriers participated. They were divided into different groups based on weight, and this weight division eventually led to the recognition of a heavy breed – the Manchester Terrier – and a low-weight breed – the Black and Tan Terrier (Miniature) in the 1920s. In 1962, the name of the latter was changed to English Toy Terrier (Black and Tan).

Today, the English Toy Terrier (Black & Tan) is a rare breed and the UK Kennel Club is concerned about its possible extinction. To promote the breed and prevent genetic problems due to severe inbreeding, they have opened their stud book to allow the North American Toy Manchester Terrier to be re-registered as English Toy Terrier (Black & Tan) – provided that the dog is a certified toy and not a standard.

The English Toy Terrier (Black & Tan) hails from dogs used both to control vermin and for participation in rat pit contests. Rat pit contests were a popular past time in Victorian England and involved placing rat-catching dogs, typically terriers, in a circle or pit with a number of rats. Before the contest started, spectators would bet on which dog would kill its quota of rats in the fastest time.

Some of these dogs were truly amazing rat-killers. In 1848, a black and tan terrier named Tiny killed 300 rats in less than an hour, despite weighing just 5.5 lbs.

Rat pit contests have been outlawed in the UK for a very long time, but the UK Kennel Club breed standard for the ETT B&T still calls for alertness and a dog that is never unduly nervous. The dog’s ancestors were brave and skilled in the rat pit, and this should be noticeable even in today’s English Toy Terriers.