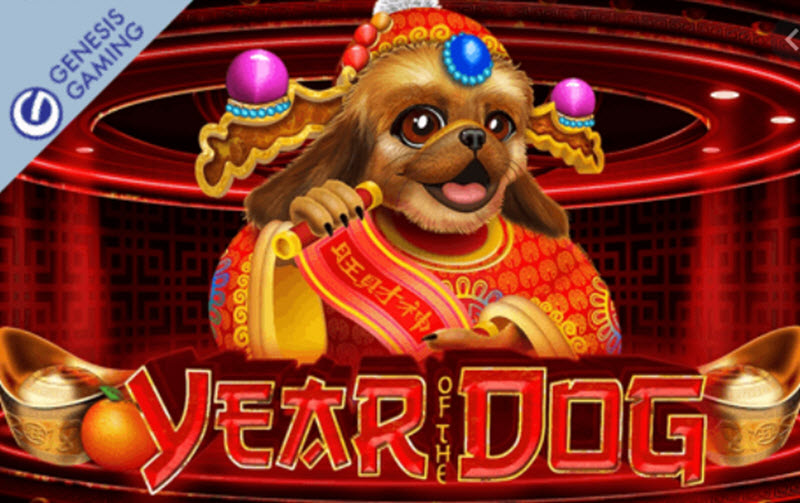 The Year of the Dog slot was created by the game developer Genesis to celebrate the year of the dog that started on 16 February 2018 and ended on 4 February 2019 according to the Chinese calendar.

The main character of this 5-reel slot is an energetic Shi Tzu, a breed that originated on the Tibetan Plateau and was developed in China. The reels are set in a Chinese-themed environment och Chinese music is playing in the background.

You can play this game in online casinos featuring games from Genesis.  A good casino that features Genesis games is BGO casino. BGO is a British online casino that offers a very good selection of games.  Other BGO games include starBurst, Kong and TED.   BGO casino makes it very easy to deposit and withdraw money and they offer friendly customer service that can help you if you have any questions.

This is a high volatility slot.

The reels are adorned with traditional Chinese symbols for luck and prosperity.

Instead of traditional paylines, this slot lets you win in 1024 different ways.

The wild symbol can substitute for any regular symbol, and is also a win multiplier. Any wild appearing on the reels will act as a win multiplier, even if it isn’t included in a winning combination. Each wild counts, and it is possible to get three 5x multipliers simultaneously = a 125x win multiplier.

The Shi Tzu scatter symbol is the highest paying symbol in Year of the Dog, as a five-of-a-kind pays 8,000 on a max bet.

The scatter symbol is also your key to free spins. Get at least three Shi Tzu symbols, and the dogs will leap off the reels and give you the option of selecting a free spins bonus.

Exactly what you have to chose from depends on how many Shi Tzu dogs that triggered the free spins, but it is four different options that each contain somewhere between 10 and 20 free spins. Also, each option come with a win multiplier in the 2x – 5x range.

This game doesn’ have any progressive jackpot. The highest fixed pay is 8,000 on a max bet.

About the Chinese zodiac

The traditional Chinese calender is based on a twelve-year cycle, where each part of the cycle is named after a real or mythological animal. This 12-year cycle is an approximation to the 11.85-year orbital period of the planet Jupiter.

The dog is an important animal in Chinese mythology, and legendary heroes are typically accompanied by a dog. The dog is also seen as essential to the development of agriculture in China, and some ethnic groups within China even have a mythological origin story that involves a supernatural dog being the founder of the group.

Where you born in the year of the dog? Below, you can also check out which heavenly branch that is associated with your specific birth year.